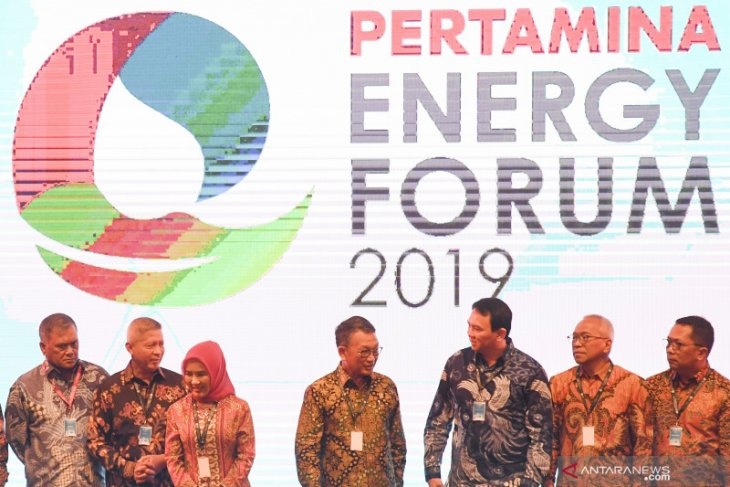 Energy and Mineral Resources Minister Arifin Tasrif (middle) along with PT Pertamina (Persero) President Director Nicke Widyawati (third left) and Chief Commissioner Basuki Tjahaja Purnama (third right) as well as the board of directors and other commissioners prepare to take a group photo at the opening of the Pertamina Energy Forum 2019 in Jakarta, Tuesday (Nov 26, 2019). ANTARA FOTO/Hafidz Mubarak A/nz

Jakarta (ANTARA) – Pertamina Energy Institute’s Advisory Board Widyawan Prawiraatmadja reckoned that biofuel will be utilized on a substantial scale in transportation in 2050.

“Pertamina has been directly involved in the development of renewable energy for the transportation sector, such as for B20 fuel development, and has recently inaugurated the use of B30 fuel,” he stated at the discussion of the Pertamina Energy Forum 2019 in Jakarta on Tuesday.

Global energy demand is forecast to continue to rise until 2050 owing to the growth in the world population. Population and energy requirements, particularly in developing nations, are viewed as the main drivers of global megatrends.

At a time when global economic growth is forecast to slow down, the economy in developing countries, especially Indonesia, is expected to record growth surpassing the global economic average. The industrial and transportation sectors are the biggest energy consumers, with an accumulation of 73 percent of the total energy requirements.

“As a leader in the national energy business, PT Pertamina (Persero) has an important role to play in translating government policies in the shift from fossil energy to renewable energy,” Prawiraatmadja remarked.

Addressing a panel discussion, themed “Global Megatrends: What Is Driving the Energy Revolution,” he highlighted the need for an energy shift.

“Pertamina can apply the government’s directives, such as biofuels, but also remain sustainable in doing business,” he explained.

Prawiraatmadja remarked that Pertamina was prepared to face global developments in the field of renewable energy, especially in the transportation sector, with the use of environment-friendly fuels.

He projected that by 2050, some 50 percent of vehicles will be run on biofuels as an energy source. Furthermore, electricity generation from new renewable resources will continue to grow.

Pertamina projects that fossil energy, including oil, gas, and coal, continue to play a major role in the context of a business-as-usual scenario.

Based on Pertamina’s Market as Driver scenario, coal still has a major role in the energy mix. Moreover, B30 and E20 (with 20 percent Ethanol) had been applied together, with the use of solar rooftop and geothermal and hydroelectric power.

In the meantime, based on the Green as Possible scenario, Pertamina projects a massive electrification transition, from fossil energy sources to renewable energy sources. B50 fuel, with 50 percent Biosolar content, and E50, with 50 percent Ethanol content, have been applied, and electricity generation of renewable energy is increasingly being installed.

Meanwhile, acting Director General of Oil and Gas at the Energy and Mineral Resources Ministry Djoko Siswanto shed light on the government’s support for investors in the form of regulations, permits, and fiscal incentives.

“Regulations and bureaucracy have been simplified while at the same time investors are provided tax incentives,” Siswanto stated.

In the meantime, IHS Markit has projected that renewable energy will contribute over 70 percent of the total energy generation capacity globally.

“At present, coal is still the cheapest energy, but renewable energy will be more competitive over time,” Nick Sharma, the executive director of the London–based global information provider, stated.